Zirconia Starfighter is an alternative model hailing from Greece, with a passion for cyber and fetish styled modelling. With a unique and visually striking look and a portfolio thats bursting with work. 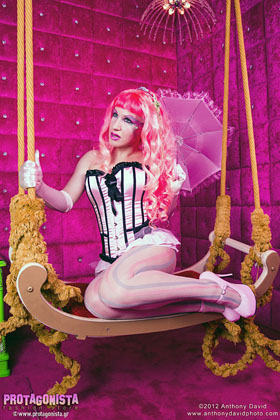 How did you start modelling? Was it something that you always wanted to do, or did it just 'happen'?

I had just finished Senior High School (Lyceum) when I started transforming myself from a frequent clubber into a regular party animal. Having myself already a huge wardrobe as a gothic and industrial music fan, along with my studies in Graphic Design and Visual Communication at Vakalo School of Art & Design (located in Athens, Greece and in London, UK at the University of Derby), I was involved in many activities and hobbies. My sculptures -for example- had a futuristic/cyber style or dark and gothic, my sketches as well. And most of my clothing, I created it on my own. So, every time I visited a club of the dark alternative scene here in Athens I had many proposals for photo-shoots. The truth is, I avoided them all because my lack of trust in people but, mostly, because I regarded myself as an artist and graphic designer, not a kind of model. One more reason why I didn't accept any photo-shoot suggestions was that I had a difficult taste, especially in that kind of modelling, which made me feel that no-one of those photographers could offer me something important with their aesthetic in shootings. I couldn't confide my taste and inspirations to people I didn't know, plus, I believed -at this point of time- that a photo-shoot couldn't offer me anything essential as a person (and personality).

One day another (Greek) guy approached me at Darksun club here and asked me for the same thing. In the beginning I refused and hesitated a lot. He made the difference though by offering me a serious suggestion and assignment, instead of a spontaneous idea of a shoot, like all the other un-professionals or wannabe professionals were (and are) used to do. So, my first photo-shoot and interview for an english (gothic, fetish and alternative nail-art) web page, happened to be a paid work, with everything that is important for such a job (contract, money transfer, agreements, signatures etc.). Something that most Greek alternative models haven't been used to do till now, as far as I am concerned. I started as a professional, not a hobbyist. In time, my portfolio got better and better and I continue with this attitude. Attitude is what matters most but, probably I won't refuse a photo-shooting if it's about an advertisement of a highly important quality. That's how it all started, it just happened.

How drew you towards alternative modeling?

Alternative modelling covers all possible tastes and styles of minded people. It needs open mindedness, imagination and creativity. This is what matters most for me at least. Alternative includes fetish, dark, gothic, cyber, Lolita, pinup, retro, rockabilly, steam punk, cyber punk, cosplay, avant garde, medieval and much more. Something that conventional modelling cannot cover is the taste in anything special. Not to mention that, the mainstream fashion always 'borrows' and 'steals' elements of the alternative fashion in order to get a more stylish, attractive or interesting. What drew me towards it is the fact that it needs inspiration and skills to follow it and, I have that thingy for difficult things. Alternative modelling is everything!

Do you have any fellow models or heroines who have inspired you?

There are some very few I truly admire and they are all in USA (Rubberdoll for example in fetish scene). I believe each model has his/her own beauty and specialty so, I am just an admirer, not inspired by others. Anime or comic heroines inspired me sometimes. I liked Durham Red (comic), Sindel (Mortal Kombat), Sailor Moon (anime TV series), She-Ra (super-heroine) and more with the air of the 'warrior princess' thing but, I didn't have any favorites. I am mostly inspired by all forms of art, from retro and pop art to cyber/futuristic and dark (HR Giger for example).

What kind of shoots would you like to work on in the future?

I have worked on absolutely every domain in fashion, even for mainstream products. I met amazing people through my work and created some fantastic images. I also learnt how to distinguish the quality in between works. Of course I continue working on all possible kinds of modeling. Somehow, I believe every fashion is interesting but, probably I would like to get more latex and warrior shootings, these are an all-time favorite. I also love 'fantasy' themes and images that pop out from fairy tales, adventures, space odysseys and so on.

What has been your biggest modelling achievment so far?

I was the first one who started working as alternative and cyber/fetish model from 2000 in my country and later, from 2004, I also worked as a go-go dancer and performer (freestyle dancer, angle-grinder, fire/burlesque performer, pole dancer).

Since then, I have appeared at many important festivals here in Greece, on the biggest Erotica Expos and fests every single year, on Greek TV (Star, Alpha, then High channel on TVDOO telecast as a regular fashion editor and spokeswoman) and, I keep my dance /performance appearances and co-operations at the most important showcase club events and exhibitions in Greece. My biggest achievement till now, according to what I am used to be told, is that I made some people see that being 'different' is nothing to be afraid of. Nowadays I can say I paved the way for other girls and boys here, to dare to model and express themselves on a more alternative basis without feeling ashamed or guilty about it. 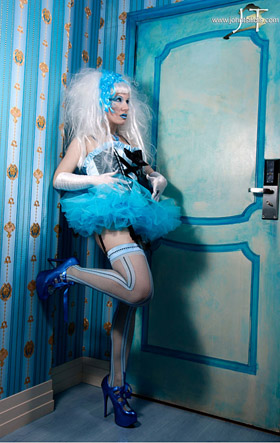 How did you discover your paticular interest in alternative fashion?

Well, I always hated being ordinary as a child and this continues till now (and it won't stop). My styling varies from time to time, from photo-shoot to photo-shoot and, I keep on improving it as much as possible, using my own ideas and creativity. I discovered my particular interest in it as a child, when I realized I didn't care being 'in fashion' as some classmates of mine for example at school. They bored me to death exactly as the conventional fashion they followed by letter. I was reading a lot, watched movies like crazy, painting, designing, sketching, sculpting and writing. I am an adrenaline freak of creation. Most of all, I am a music lover and, the kinds of music I prefer were always based in special tastes, inspirations and styles in fashion (avant garde, industrial, EBM/TBM, noise, power electronics, gothic, dark wave, electro, future pop, synth pop, ethereal, neofolk, dark ambient, gabba, dark trance etc.). Of course we shouldn't confuse music with fashion but, let's not forget that, music creates images and stories. So, following the alternative fashion was -not more or less- my personal way of expression.

Are there any companies or designers that you'd like to work with?

Yes. And they are too many to be listed here. I like many latex designers from UK and Germany and there is another designer in London I'd noticed six or seven years ago through internet whose work is fabulous (Girl Armour). I want to add more latex and warrior photos in my galleries and main website (www.zirconia-starfighter.com) but, I don't hurry at all for that as I already have numerous ones which I haven't revealed yet.

What are your goals & aspirations for the future?

Well, as Greece is passing through a huge economic crisis now, I hope that this problem will be solved first and then the rest may come. I started cooperating with Alt Life magazine in Greece, the first printed magazine ever in my country that gets deeply involved with the alt scene, as an article writer. I keep a regular column on Socialistas.gr (a famous website on here) which is called 'Memories of an Alternative/Fetish Muse' as an alternative and fetish fashion editor. In the meantime I continue go-go dancing, designing, improving my shows and adding more elements and tricks in my performances and wardrobe. All I can do is to hope for the best and to get even more experienced which is my main goal.

You can find out more about Zirconia Starfighter & her work over at www.zirconia-starfighter.com