From Eurotrash to those conical bras, take a peek into the world of Jean Paul Gaultier.

He's always been championing the unusual, his infamous conical bra corset worn by Madonna has become one of those iconic images in fashion history. What Jean Paul Gaultier hasn't done for the fashion world isn't worth knowing, he's a prime example of high fashion crossing over into the alternative and what better way to celebrate his work with a long over due exhibition at The Barbican. 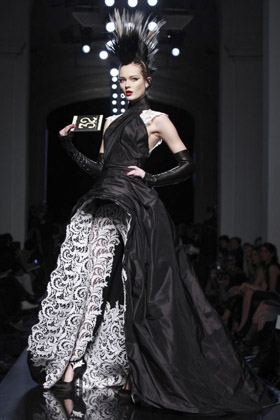 The Fashion World of Jean Paul Gaultier: From the Sidewalk to the Catwalk has only just opened it's doors, a mammoth exhibition showcasing his work in perhaps one of the most entertainingly fashionable ways. His influence has long been felt in alternative fashion, in part his own designs have been influenced by punks and dandies, and much like Dame Vivienne Westwood he's one of those couture designers whose work is well received and adored in the alternative scene. Who could forget his use of vintage hairstyles in his S/S 2012 catwalk shows, where he also used several alternative models, or the gorgeous gothic gowns he designed in 2009, his work has certainly had an alternative pinch of inspiration.

The exhibition brings together some of his most iconic works, a time capsule of his designs that shows he's much more than just eye catching corsetry and bretton stripes.

A theatrical installation which brings together 165 of his couture pieces displayed on lifeless mannequins with projected expressions, we can only imagine what delights are showcased inside but from previews seen during the opening weeks we've already seen his 'pregnant' corset, hair dresses, show girl pieces and plenty of gorgeously gothic couture pieces on show. 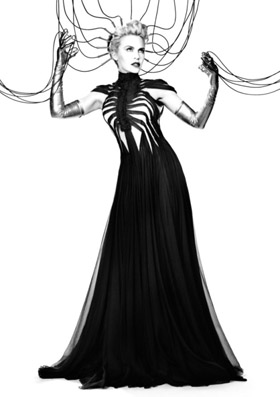 Set on a moving catwalk in a stunning boudoir set it brings together not just his couture work but also costumes designed for film and performance, as well as photography featuring his work by the likes of Cindy Sherman, Andy Warhol and David LaChapelle, plus footage from shows, films and performances; we can only hope that the Eurotrash section of the exhibition includes some of his witty footage from the iconic 90's show.

Why it's taken him so long to agree to an exhibition on his work, the designer often proclaimed that he resisted the idea of an exhibition "because that is something for when you're dead", we're certainly glad that he's been persuaded into it. The Barbician is the eight venue to play host to this exhibition which is set to run until August 25th. It's certainly a rare chance to take a close up look at his stunning designs and we'll be paying a visit to take a peek ourselves.

To find out more and book tickets for the exhibition visit www.barbican.org.uk | The Barbican, Silk steet, London where the show opens daily.

First image via The resident, Second image via Fashion editorials