It has been estimated that 125 million people use contact lenses worldwide, so I thought well if you can't beat them? Join them! 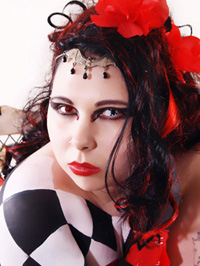 So when I was asked to review contact lenses for Alt fashion provided by the fabulous company Youknowit.com I jumped at the chance.

The first lenses I tried were the fabulous leopard print lenses. When taking them out of the pot I was surprised to see how detailed they were.

In order to get an unbiased opinion on the lenses I employed one of my models to review them for me as she had never tried lenses in before and previously I had some issues with cosmetic lenses and was reluctant to try them first.

The white leopard print lenses are £17.99 for the pair which I found to be quite reasonable considering the detail that goes into the lenses.

The model had a little bit of trouble putting them in, so after about an hour soaking the lenses in the solution (the recommended time is around 2 hours) I put them in for her, this took me a matter of seconds after the model got used to them being near her eyes. The model wore them for around 6 hours and we discussed the pros and cons about wearing them which were the following. 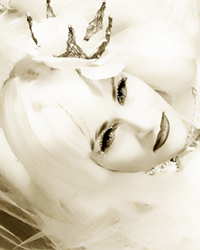 Once used to them, you do forget they are there as you can not feel them.

They are visually stunning and interesting when photographed.

They are easy to put in and easy to remove

They do no irritate your eyes or interfere with your vision.

They can be too large for some people's eyes causing the lenses to curl up towards the back of your eyeball.

If not prepared properly they can burn and sting your eyes and not stay in place.

The second pair of lenses I reviewed was the biohazard lenses. By funky eyes and retail at a miniscule £6.99!

I put these lenses in so easily, without any problems and they fit perfectly. I can honestly say they have been the easiest lenses I have ever worn. However I do not recommend them if you have small eyes as they lose the effect and can curl up behind your eyes.

Does not interfere with your vision.

Can slip behind eyes and can be sore if not prepared correctly.

The third pair I tried was something I wanted to save to go with fabulous body paint, so when I had a chance (after letting my eyes settle for a few days) I wore the Skull and cross bones lenses by Terroreyes, £12.99.

Now I have worn these lenses before a few years back and I had terrible trouble with them, I ended up with an eye infection and couldn't see for a few days. So I was reluctant to try these lenses.

When putting the lenses in I had a terrible job to do it, the lens kept curling up behind my eye as they were too large for my eye and would not stay in place, therefore making my eye sore an irritated. In the end I could only wear one lens as I was in to much discomfort.

However in order to be fair, I let the other unworn lens be worn by another model when I was photographing him and he had no trouble putting it in. I compared our reviews about the lenses to find that his eye was larger than mine in diameter therefore he had no discomfort wearing it. 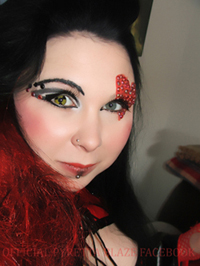 Are visually striking and fit around the pupil correctly.

Can be painful to wear, slip and cause eye infection.

So after all the lenses I wore it came down to the last pair, the stunningly vibrant UV blue lenses (£6.99).

They were so glaringly bright in the sun I had to take a double look at them. I absolutely love these lenses, unfortunately due to my eye being sore still from the skull lenses I allowed another model in my employment to wear it, giving it a bit of diversity for a male model to experiment with the lenses. 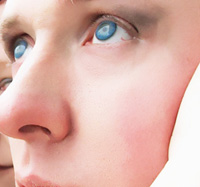 He put the lenses in with ease in the most awful weather may I add, as it was pouring down when we were working we had to do everything very quickly and these lenses did their job.

They look amazing in natural light despite being UV lenses and worked a treat. They changed the look and feel of the eyes and were simply striking.

Bright, natural and easy to wear.

So after all the ups and downs, would I recommend cosmetic lenses? Yes I would.

Despite the skull lenses irritating my eyes all the others were awesome, and there are so many different types out there I would love to try them all.

The only thing I do suggest is that you take time and care to prepare them. Cosmetic lenses are just as they say on the tin, cosmetic. They do not improve your eyesight so if your eyesight is not 100 percent and you wear glasses these may not be for you as you will not be able to see.