The future of the alternative high street.

How redevelopment puts another nail in the coffin of alternative shopping.

Where have all the alternative shops gone? Swept under the carpet for another block of flats, and a shopping centre.. As the alternative is driven to the world of the web, we can't help but think what this means for alternative business.

Whilst Camden may be a far cry from it's heyday, it's still an area that's vastly important for alternative business, driving in tourists from around the world who've come to see what alternative finds they can sink their claws into from Camden's world renowned markets. An area that's already lost so many key alternative shops that were once a major part of it's history, we were gutted to hear of the closure of the iconic Black Rose shop last year, we don't think we've ever been to Camden before it was there! Now we can only wait to see what this new development does to the area.

But it's not just London, we've witnessed many major closures and redevelopments around the country to key alternative shops and districts, like the closure of Liverpool's infamous Quiggin's back in 2006, to ironically make way for a new shopping district, to the loss of Manchester's Coliseum in 2007, which was gutted out to make way for apartments, seeing major alternative shopping districts closed down for the sake of big business.

It's always a crushing blow to see alternative shops closed down by any means, whether they've been driven out by high rates or commercialization. From our very own previous End of year poll winners, Birds Yard, who closed their Leeds shop a few years ago (but we're glad to see them alive and well in Sheffield), to even our recent End of year poll nominees, Vintage Dolls boutique in Rotherham. You can't beat visiting a shop, talking to the traders and getting to try on their wares, and it's a key experience that more and more places around the UK are starting to lose. 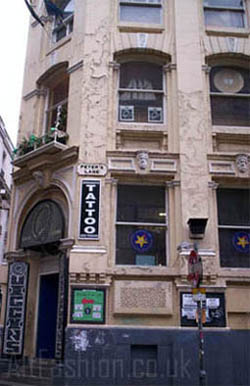 As more businesses turn to the online market, when they've been driven out of major cities and towns, we're thankful for the low overheads that allow many of our favourite alternative and independent designers & companies to continue to trade online. It's never been a more crucial time to support alternative businesses to help keep them afloat, and it's what we've been doing here at Alt Fashion ever since we launched nine years ago, continuing to promote and support alternative business here in the UK and worldwide.

So keep on visiting your local shops, supporting your favourite designers, and shopping where you can, however you can, even if it's just telling a friend, or sharing your favourite items online. Whilst some of our major shopping districts may be getting swept under the rug for big business, we can still keep on supporting them in any way that we can.

Images: From the Alt Fashion archives.