I've always had a soft spot for gooey spooky treats, it's the 15 year old goth in me who gets excited by marshmallow ghosts and jelly bats. Combine that with one of my favourite treats, cupcakes and I can't wait to raid the kitchen. 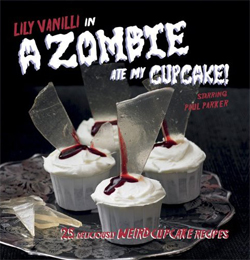 "A zombie ate my cupcake" has been re-invigorating a love for spooky treats since it's launch last year. Now with a re-vamped book and kit out soon, there's even more of an excuse to get baking.

Prior to picking up the "Zombie ate my cupcake" book my baking skills had been questionable at best. Failed gloopy macaroons and hardened cupcake lumps weren't exactly the edible treats I'd intended to make, but ever the optimist I've pressed on and enthusiastically tried my hand at a few spooky baked treats.

With tasty recipes such as the Devils food cupcakes, Eerie eyeballs and Sweeney Todd's surprise, I didn't know where to start with so many flavours and looks to create. As a novice baker I opted to test out a somewhat bright and colourful recipe from the book, the Rainbow cupcakes. 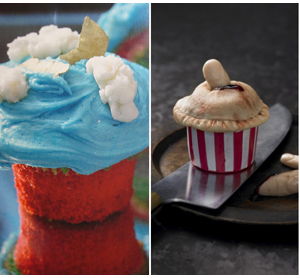 These "electric kool aid acid" cakes are as entertaining to make as they are to eat. With a layered process resulting in a day glo multi coloured cupcake. The recipe is incredibly easy to follow resulting in one of the tastiest recipes I've ever made. Even a failed cook like myself has managed to create cupcakes so delicious that they've literally all gone by the next day!

There's plenty of recipes within the book to suit all levels of cooks and tastes inside, whether you fancy moulding some bloodied heart fondant for your cupcakes, or creating a zombie snack.

It certainly doesn't need to be halloween to get your teeth into these recipes, with basic cupcake recipes included that you can easily adapt to suit any season. It's certainly got me back in the kitchen after my previously failed disasters, making spooky creations that are as delicious to eat, as they are entertaining to make.